Looking for top quality Angels Envy Bourbon 750ml a great price? You have found it with our top selling Angels Envy Bourbon. Order yours today while supplies last and don’t forget to provide us a 5 Star review for Quality Liquor Store. Review us

How do you piss off an angel?

Lincoln Henderson did it by breaking a nearly two-hundred-year-old divine contract. He's always been one to sneer at traditions. So when he set out to create the most heavenly of all bourbons, Lincoln decided he might have to break some rules.

See, in bourbon circles, it's well accepted that each distillery owes a percentage of the bourbon in the barrels to the angels. This little agreement is known as the Angel's Share, and nobody has dared mess with it for two centuries.

Why Lincoln did what he did

But Lincoln, being a bit of a malcontent, figured maybe he could put a twist on this deal. Legend has it that he sat the angels down and got them to agree that they could take more of their share if they agreed to leave behind something even better.

The deal was sealed. But when the angels snuck a sip of Lincoln's incomparably smooth bourbon with exquisitely subtle "expressions" that came from joining 200 years of bourbon tradition with 400 years of port wine heritage, they felt they should have gotten a bigger share.

That's why Lincoln thought it appropriate to call his bourbon Angel's Envy. The angels, however, don't find it funny.

"98 Points (Classic; the pinnacle of quality).
A beautiful, mouthwatering newcomer to the whiskey scene."
— Wine Enthusiast

"★★★★★ (Highest Recommendation). A masterpiece that will live long in legend after the final bottle is poured. Deserves a sixth rating star." — Wine Enthusiast

Aged for four to six years and finished in port casks, this bourbon earned a score of 98 points from Wine Enthusiast and earned five stars from F. Paul Pacult’s Spirit Journal. 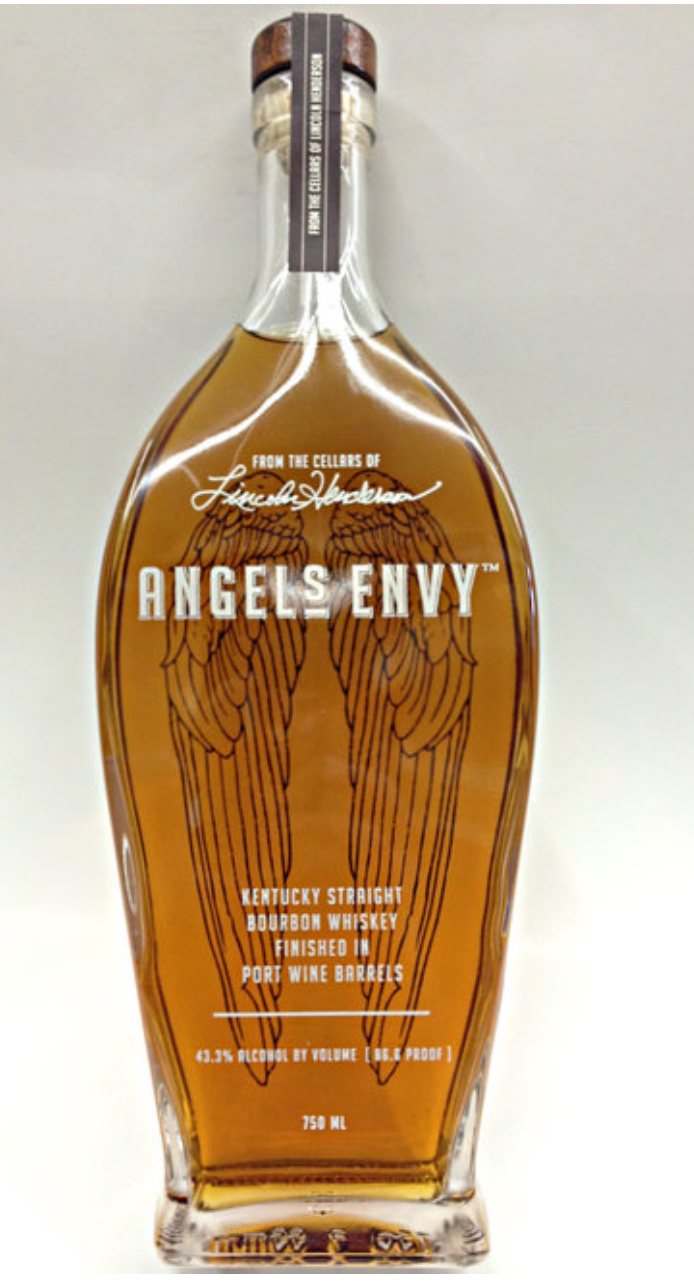 94 Points - Kentucky straight bourbon whiskey finished in a port pipe. This is veteran master distiller Lincoln Henderson’s newest creation, and it’s a beauty. Richly textured, silky, and well-rounded, with ripe berried fruits, candied tangerine, light toffee, maple syrup, and creamy vanilla, sprinkled with spice (cinnamon, hint of mint). Smooth, silky finish, and dangerously drinkable! The port pipe notes dovetail perfectly. Lovely just the way it is, but it’s begging for a cigar. My only gripe: why not 45 or 50% ABV? But I’m splitting hairs. I really enjoy this stuff!
(Vol. 20, #1)  Reviewed by: John Hansell